Author Niraj Mishra Date May 17, 2020
Tags
Trees
Apple Tree : Apple trees are believed to have been cultivated from the third century BCE. Today, apple is probably the most popular fruit for adults and children.


It has a wide spread partly because the apple tree is very flexible and resilient. It can also thrive at temperatures below -22 ° F (-30 ° C). Nowadays apple trees are cultivated under various climatic conditions, ranging from the cold of Canada to the tropical climate of Africa. Consequently, apple trees do not always require favorable conditions to flourish. Trees are popular for adapting to their local conditions and produce some fruits despite difficulties, provided the variety is selected rationally. Approximately half of the world's apple production is in China, but apple trees are also cultivated in Australia, North and South America, North Africa and Japan. In the United States, apple trees are grown commercially primarily in Washington, New York, Michigan, Pennsylvania, Virginia, California, North Carolina, Oregon, Ohio, and Idaho.

The apple tree (Malus pumila) is a member of the Rosaceae family. It is a deciduous tree (it loses its leaves seasonally). It reaches an average height of 16 feet (5 m). Standard apple trees can reach heights of 25–35 ft (7,5 - 10 m) or even higher. Semi-dwarf and dwarf trees reach a height of 6–20 ft (2–6 m). The bloom is produced in the spring. Fruits mature on seedlings that are 2 or more years old. They mature in late summer or autumn, depending on the variety. There are over 7000 known cultivars.


What other names is Apple known?

10 Health Benefits and uses of Apple


Apples are one of the most popular fruits - and for good reason. They are an exceptionally healthy fruit with many research-supported benefits. Here are 10 impressive health benefits of apple.

A medium apple - 6.4 ounces or 182 grams - provides the following nutrients:

Apples are also a rich source of polyphenols. While nutrition labels do not list these plant compounds, they are potentially responsible for many health benefits.

To get the most out of the apple, leave the skin - it contains half of the fiber and several polyphenols.

Summary:
Apples are a good source of fiber and vitamin C. They also contain polyphenol, which can have many health benefits.

2. Apples can be good for your heart 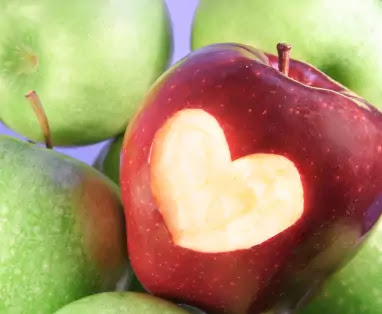 Apples have been associated with a lower risk of heart disease.
One reason may be that apples contain soluble fiber - which can help reduce cholesterol levels in your blood.

They also contain polyphenols, which exert antioxidant effects. Many of these are concentrated in the peel.

One of these polyphenols is the flavonoid epictine, which can lower blood pressure.

Analysis of studies found that high intake of flavonoids was associated with a 20% lower risk of stroke.

Another study compared the effect of eating one apple per day to statins - a class of drugs known for low cholesterol - concluded that apple heart disease caused death by drugs Would be almost as effective.

However, since this was not a controlled trial, one would have to conclude with a grain of salt.

Another study used white-flavored fruits and vegetables such as apples and pears, which reduced the risk of stroke. For every 25 grams - approximately 1/5 cup of apple slices - consumed, the risk of stroke decreased by 9% .

Summary:
Apple promotes heart health in many ways. They are high in soluble fiber, which helps lower cholesterol. They also have polyphenols, which are associated with lower blood pressure and stroke risk.


3. Apples can be good for weight loss

Apples are high in fiber and water - two qualities that replenish them.

In the same study, those who started their meal with apple slices ate an average of 200 fewer calories than those who did not.

In another 10-week study of 50 overweight women, participants who ate apples lost an average of 2 pounds (1 kg) and ate fewer calories overall, compared with those who had a similar calorie and fiber content with Oat Cookies.

Researchers believe that apples are more filling because they are less energy, yet provide fiber and volume.

In addition, some natural compounds in them may promote weight loss.

A study in obese mice found that people who gave a supplement of ground apples and apple juice lost more weight and had "worse" LDL cholesterol, triglycerides and, compared to the control group Total cholesterol levels were low.

Summary
Apples can aid in weight loss in many ways. They are particularly filling due to their high fiber content.

4. Apple Can Help Protect Your Brain 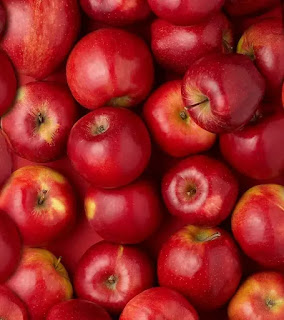 Most of the research focuses on apple peels and meat.

However, apple juice may have benefits for age-related mental decline.

Apple juice may help preserve acetylcholine, a neurotransmitter that may decrease with age. Low levels of acetylcholine are associated with Alzheimer's disease.

Similarly, researchers feeding whole apples to elderly mice found that a portion of the mice's memory was restored to the level of younger mice.

That said, whole apples contain compounds similar to apple juice - and it is always a healthy alternative to eating your fruit.

Summary:
According to animal studies, apple juice may help prevent the degradation of neurotransmitters involved in memory.

Apples contain pectin, a type of fiber that acts as a prebiotic. This means that it feeds the good bacteria into your intestine.

Your small intestine does not absorb fiber during digestion. Instead, it goes to your colon, where it can promote the growth of good bacteria. It also transforms into other supporting compounds that are transmitted back through your body.

New research suggests that this may be the reason behind some of Apple's protective effects against obesity, type 2 diabetes, and heart disease.

Summary:
The type of fiber in apples feeds good bacteria and may be the reason they protect against obesity, heart disease and type 2 diabetes.

6. Apples can be good for health

Fruit eating is associated with higher bone density, which is a marker of bone health.

Researchers believe that antioxidants and anti-inflammatory compounds in fruits may help boost bone density and strength.

Some studies suggest that apples, in particular, can positively affect bone health.

In one study, women ate a meal that included either fresh apples, peeled apples, apples, or no apple products. Apple eaters lost less calcium from their bodies than the control group.

Summary:
The antioxidant and anti-inflammatory compounds in apples can promote bone health. Depending on your age, over-eating fruits can help preserve bone mass.

7. Apples are associated with lower risk of diabetes

Several studies have linked apple eating to a lower risk of type 2 diabetes.

In a large study, eating an apple was associated with a 28% lower risk of type 2 diabetes than not eating any apple. Even eating just a few apples per week had a similar protective effect.

It is possible that polyphenols in apple help prevent tissue damage to the beta cells in your pancreas. Beta cells produce insulin in your body and are often damaged in people with type 2 diabetes.

Summary:
Eating apple reduces the risk of type 2 diabetes. This is likely due to their polyphenol antioxidant content. 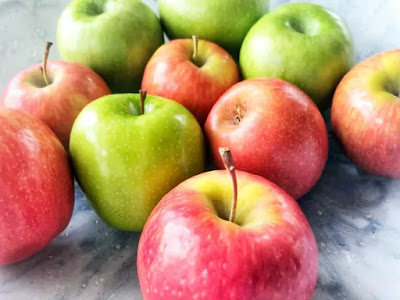 Test-tube studies have shown a link between plant compounds in apples and low risk of cancer.

Additionally, a study in women reported that eating apples was associated with a lower rate of cancer death.

Scientists believe that their antioxidant and anti-inflammatory effects may be responsible for their potential anti-cancer effect.

Summary:
Apples contain many naturally found compounds that can help fight cancer. Observational studies have linked them to lower risk of cancer and death from cancer.

Antioxidant-rich apples can help protect your lungs from oxidative damage.

A large study of over 68,000 women found that those who ate the most apples had the lowest asthma risk. Eating about 15% of a large apple per day was associated with a 10% reduced risk of the condition.

Apple skin contains the flavonoid quercetin, which may help regulate the immune system and reduce inflammation. These are two ways in which it can affect asthma and allergic reactions.

10. Apple may protect against stomach injury from NSAIDs

Pain relievers are known as non-inflammatory anti-inflammatory drugs (NSAIDs), which can injure the lining of your stomach.

However, research in humans is needed to confirm these results.


Apple Tree : Do you have Apple tree farming experience? Please share your experiences, methods and practices in the comments below.